Hello everyone, I’m Helen, the East Staffs Co-ordinator for PhunkyFoods. This week, I caught up with the PhunkyAmbassadors at Holy Rosary Catholic Voluntary Academy, Burton, to see what they have been up to. They have been focusing on our Food Waste message since October (after previously working on our Snack Attack message). Here’s what I found out……

Hi guys – tell me something you’ve learned about food waste.

Julia: “I’ve learned just how much food is being wasted by people, and how we can stop people wasting it. We can encourage them by awarding a sticker, especially the little children because they can be proud of their sticker, and they can carry their sticker round and show it to other people, who will want to have their own sticker like that.

So what activities have you been doing in school this term? 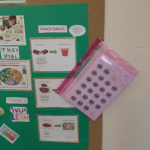 Theo S: “We’ve been handing out stickers to children who’ve eaten all their school dinner, or have eaten healthy (unpackaged) snacks. This was children in Reception or Y1 or 2. We keep a bag of Phunky Foods stickers on our Phunky Foods display board in the dining hall to hand out when we need them”.

And what was it like carrying out this activity?

Theo N: “It was very enjoyable. I really wanted to get the message across and tell children that they can also turn any leftovers into other meals”.

Do you think these activities have made a difference in school?

Leah: “I think it has because I have seen more people trying not to waste food. We based it on the little kids because they all like stickers and so they will aim to have a healthy waste-free lunch so they can earn a sticker. We made a list of children who had eaten all their dinner or had healthy snacks, and there are 93 names on the list!”

Wow – amazing work guys! – So, do you have any advice for parents about ways to avoid food waste at home?

Julia: “I would say to make sure that they don’t throw away food past its best, but try and make it into another meal. For example, a bruised banana could be made into banana bread. If they can’t eat all the food they have made, they can try to save it for another day and make another meal.

Leah: Sometimes children are hungry, but they don’t like a food their parents give them, so my advice is to put food in small amounts as otherwise it might be a waste of food if children don’t eat it and throw it away.

Julia: “Also, you could try giving children a range of small side dishes with their meal of things to try. So they get some foods they know they like, but some new foods to try too in small amounts. Also try to encourage them in a positive way, maybe with a small treat, rather than telling them that they have to eat everything”

Theo N: “Trying to avoid wasting leftovers….so maybe at Halloween if parents carve a pumpkin, you could use the leftover for lots of things like pumpkin pie rather than throw it away. Also, you get so many seeds out of it, you could try planting them…”

Julia: “Or you could try eating them…my mum actually bakes pumpkin seeds and they go all crispy and they’re really nice. Also, at Christmas, if you’ve got lots of leftover turkey, you could save that and add it into a different dish”

Theo N: “Maybe you could save any turkey from Thanksgiving and use that at Christmas”

Wow, lots of brilliant ideas there – I might try some of these myself! So, to finish off, tell me, what’s the best thing about being a Phunky Foods Ambassador?

Julia: “In my opinion, the best thing about being a Phunky Foods Ambassador is encouraging children to eat more healthy foods, not just in school but at home too, so they have a healthier diet to make them stronger,.”

Leah: “Mine is getting to learn about other kids, like what they eat and how healthy they are. When we do surveys, sometimes the answers from the little kids make me laugh because they’re funny. Also, its knowing that I can do a job that has an impact”.

Theo N: “The best thing about being an Ambassador is helping kids learn not to waste their food”

Theo S: “The best thing in my opinion is to spread the word about being healthy”

Following this catch-up meeting, I went with the Ambassadors into Mr Hancock’s Y3 class where they carried out their final survey, to find out how much of an impact their activities around food waste have had on children in school. 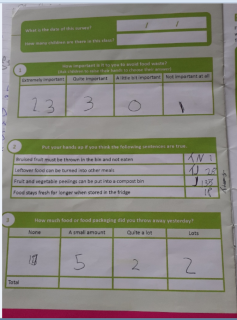 So, I think we can say that the Ambassadors work has definitely had an impact on the children in school and their awareness of food waste.

After meeting with the Ambassadors, I was so inspired by their enthusiasm and ideas, that I decided to try making a lunch left entirely from leftovers.  I had some jacket potato skins that my children had left at dinner time yesterday and some leftover sweetcorn and bacon.  I removed the remaining potato from the skins, mixed this with some reduced fat soft cheese with garlic and chives and some reduced fat grated cheddar.  I added in the cooked bacon pieces and the leftover sweetcorn and baked this in the oven for 15 mins at 180.  It was absolutely delicious, served with a big healthy green salad.  It would have been so easy to throw those potato skins in the bin, yet I was able to turn them into another meal.  Why not give it a try? 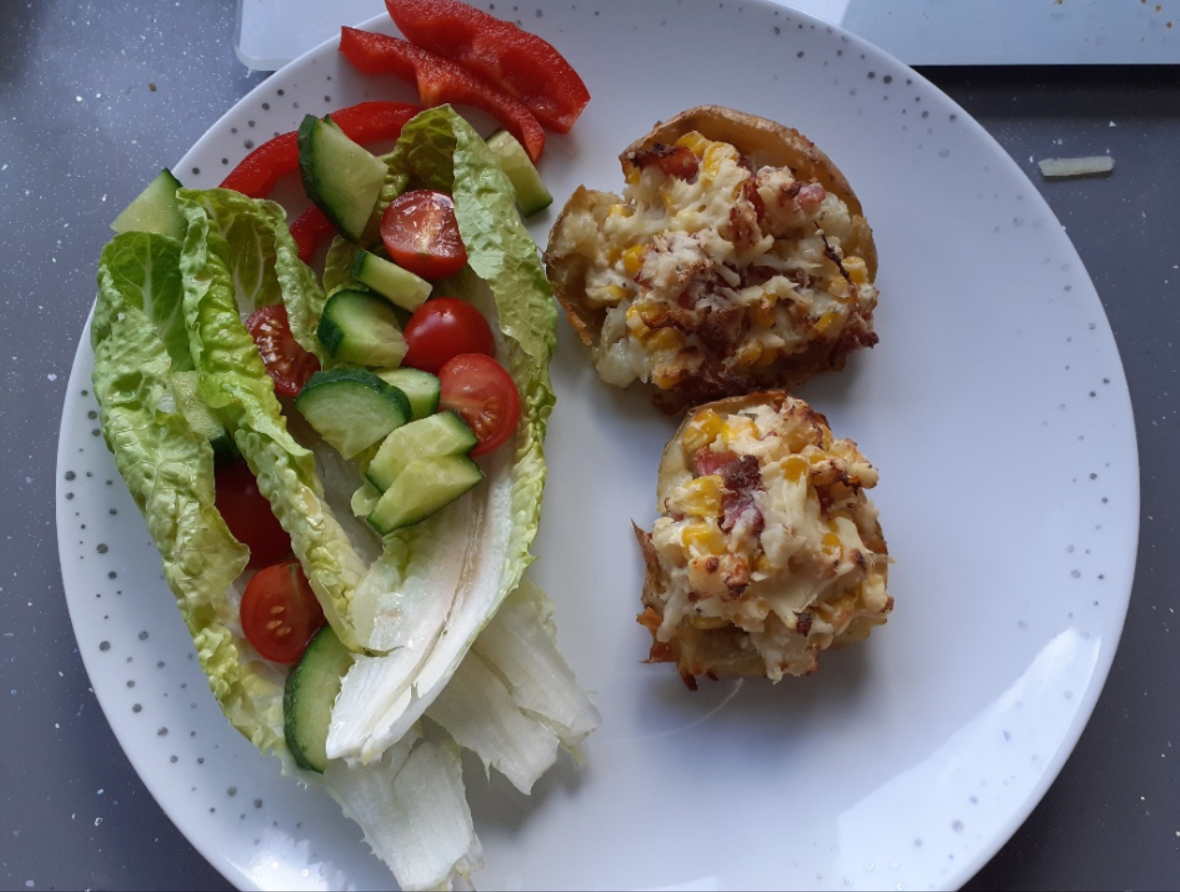