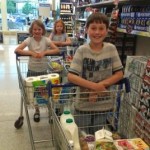 The good news is that UK average energy (calorie) intakes from household food are declining, consistent with the longer term downward trend since the mid 1960s.  However the percentages of energy derived from sugars and  saturated fats have hardly changed since 2010 – and continue to exceed the Dietary Reference Values, which are set as recommended maximum levels.  Findings relating to sodium (salt) are also mixed: intakes are on a downward trend (good news), but they are still a whopping 84% above the recommended maximum of 6g/salt/day for adults, excluding table salt!

And finally, less really is more…on average, UK households purchased 4.2% less food in 2011 than in 2007 while spending 12% more.  Yet another statistic highlighting the growing pressure on family food budgets, a problem which is unlikely to go away any time soon (2).

1. DEFRA (2012) Family Food 2011.[Internet] Available at:http://www.defra.gov.uk/statistics/files/defra-stats-foodfarm-food-familyfood-2011-121217.pdf
(Family Food 2011 is a report on the 2011 Family Food Module of the Living Costs and Food Survey. It provides detailed statistical information on purchased quantities, expenditure and nutrient intakes derived from both household and eating out food and drink.  Data is collected for a sample of households in the United Kingdom using self-reported diaries of all purchases, including food eaten out, over a two week period.  Where possible quantities are recorded in the diaries but otherwise estimated.  Energy and nutrient intakes are calculated using standard nutrient composition data for each of some 500 types of food.)